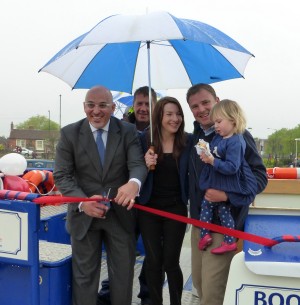 Canal and River Tours Limited was formed in the summer of 2013. The owner and founder, Colin Pike had the idea to take passengers through the historic canal lock at Stratford after doing the same as a passenger and pupil at a local Primary School in the mid 1970's.
It was post 1974, after Her Majesty The Queen Mother had recently visited to officially open the River Avon Navigation from Stratford to Evesham. As a treat, a local primary school took their pupils on a canal boat through the canal lock and down onto the River Avon, much to the joy and fascination to all of the children on board. It was this event that was the inspiration for this company.
Colin has been involved in several start up businesses locally since 2002, having previously owned and developed franchises covering Kent, East Sussex and Warwickshire since 1995. He currently owns The Baguette Barge, the Ice Cream Barges and enjoys working on new and exciting projects ranging from new build basement and property construction to canal boat design and build. He lives locally with Emily and their daughters Jennifer May and Daisy Eve.
'We are sure that many children will find lots to inspire them after their own Canal and River Tour. We will do everything we can to make this happen'.